In a recent storm, one of my closeboard fence panels (also known as a featherboard fence) was destroyed. It didn’t just blow over, it flapped back and forward in the wind slowly falling into many pieces.

I therefore needed a replacement panel. Rather than paying someone to replace it, I thought it would be fun (and probably somewhat cheaper) to build my own panel.

The existing concrete fence posts were fine so I just needed the wooden panel to go inside it. I measured the fence at about 3m across.

I figured out a way to construct the fence panel in my garden and then position it into place. This is a different way of constructing the fence panel to other guides I’ve seen, but the final result appears to be good.

I already had some 3m 38x50mm treated carcassing timber that I’d bought from http://www.buildbase.co.uk that I wanted to use. This was an alternative to using the more traditional arris rails that were on the rest of the fence. I gave these 3m timbers a quick coat with Cuprinol decking oil*  oil to more closely match the brown feather edge boards.

To add to this I bought 40 x 5 foot 6 brown featheredge boards from my local fencing company. I’d estimated that I might need about 34 boards, but I wanted some spare in case I cracked any of them during installation, or in case I needed to make a minor repair to any of the other fence panels. I did have to pay a higher price than I’d seen on their website due to the ‘volatile market’ but the price (~£107) seemed acceptable and they arrived a few days later.

I was lucky in that my 3m carcassing timbers were slightly longer than the fence width, so instead of cutting them short, I cut part of the ends so they’d fit into the mortise hole of the concrete fence post slots. I then strengthened the cut ends of the timbers with metal mending plates* which I screwed into the main part of the wood. I didn’t screw these into the cut part of the wood as I thought that might weaken it.

On the right side, I cut some small pieces of wood which would hold three mending plates* on which to rest the timbers.

I didn’t yet fasten the timbers or the mending plates in place – if you were fastening the featheredge boards from the other side you could do that at this point, however as I was going for a more complicated build on my side of the fence I couldn’t do this.

Fixing the rails into their shape

To allow me to move the frame onto the ground I needed to fix the position of the rails. To do this I used two vertical pieces of wood to fix the heights of the rails, and a diagonal piece of wood to endure that the three rails did slide left or right. I drilled pilot holes and screwed them in to avoid splitting the wood.

I also drew a line in pencil on the vertical pieces of wood for the height of the existing fence on both sides.

I took the frame carefully off the fence posts and laid it on the lawn with some other scrap wood underneath to support it.

I used a piece of string to mark out the top line for the fence panels.

Then I marked the top and bottom rail in thick pencil every 9cm. I’d measured the spacing from the existing fence. As I got towards the end of the rails I had to slightly adjust the spacing to 8cm so that the final panel would neatly finish at the end of the frame.

The frame was finally ready for the fence boards.

I’d spent a bit of time researching the right type of nail to use. I picked 50mm ring nails* which would go through almost all of my timbers when accounting for the close board panels. The ring parts of the nails are important as they stop the nail from easily coming out as a smooth nail would. I chose galvanised nails to reduce the chance of rust. This is a cheaper option than going for stainless steel although not as rust-proof.

I started nailing each panel in, starting from what would be the right of the fence, taking care to make sure the boards were overlapping the same way as the existing fence panels. I carefully positioned each panel using my string for the top of the panel, and the pencil mark for the edge. I found that if I gently tapped the nail a few times it would get through the initial board without many of them splitting. Still, a few of the boards did split and I then did use some of my spares.

I did the top nail first, then the bottom nail, again positioning the board against the pencil mark, before finally doing the middle one. Each nail took me 8-10 taps to get it so this project did generate quite a bit of hammering noise.

Once I’d done the first 5 feather edge boards I lifted the frame back up to check that it would still fit into the fence. I notice that now with the boards in place there was a metal bolt at the bottom of the fence that I had to unscrew, and I also needed to make sure that the mending plates on the right side were removed before I could push the fence in. It was definitely useful doing this test run before making the fence a lot heavier with the remaining ~30 boards!

I continued nailing the boards in until I got to the very end.

The fence panel was now a lot heavier than when I’d started so I needed some help to lift it up and slot the left-hand side in. I was glad to see that the timbers went into the slots. We then moved the panel in so the right-hand side was up against the fence post. We lifted it so I could then slot in the three mending plates.

I made a pilot hole and screwed the mending plates into the timbers, and then hammered in a few offcuts of wood into either wide to stop and final wobbling.

Here is the result – it looks pretty smart and is reasonably sturdy for a 3m wide panel. The panel does flex a bit, but less so than the existing panels. If I were to do another panel I’d probably use 47×50 carcassing timbers rather than the 38×50 ones. This might make it a bit more rigid. Still, I’m happy with the result and after a few weeks the fence is still up. The real test will be next time we get a storm.

This was a fun project to do and this technique I used is useful if you don’t have easy access to the other side of the fence, and for when the concrete fence posts are already in place.

Affiliate disclosure: Links with a * are affiliate links. As an Amazon Associate I earn from qualifying purchases. 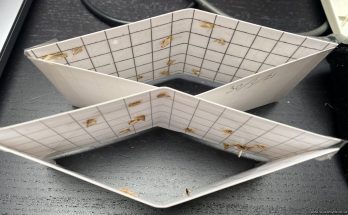