I have spent a lot of time in the past few weeks trying to get rid of an infestation of clothes moths. The species in question is known as the common clothes moth, the webbing clothes moth, or if you are really posh, as tineola bisselliella.

There have been clothes moths in this property for many years eating the carpets but it is only recently that damage to clothes was spotted. This initiated a massive operation in order to protect the remaining clothes and get rid of the moths. Here are some photos of the chewed up carpets and clothes. The carpets here are wool and they really like them! 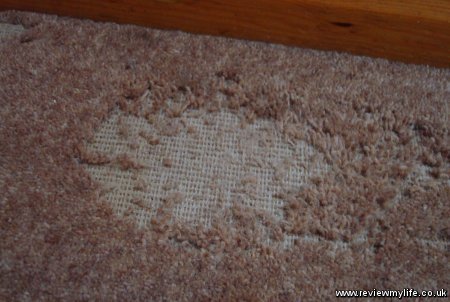 If you don’t know what a clothe moth look like here are some images. They are only about a centimetre long but are very destructive. They lay their eggs on cotton or wool clothes and carpets. The clothes moths themselves do not eat the clothes. It is what hatches from the eggs that causes the damage. 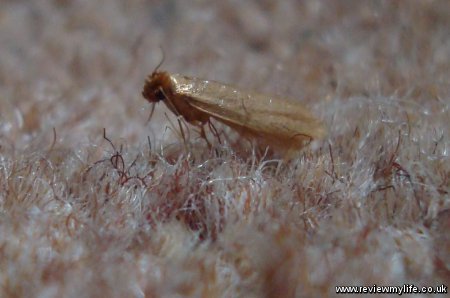 The larvae are a bit over a centimetre long. They are white with a brown / red head. When they hatch they start eating your clothes / carpet. Later they turn into moths. 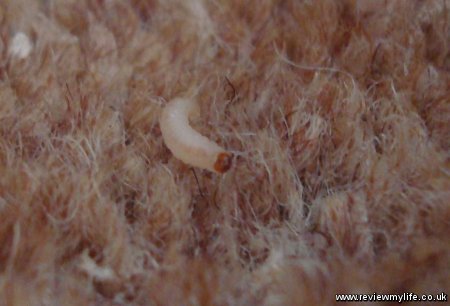 The clothes moths and larvae like dark undisturbed places such as under your bed, desk or in your wardrobe. When I closely inspected the carpets I spotted hundreds of eggs along the edges of the carpet under a desk. The eggs are tiny – much smaller than a pinhead.

When I lifted the carpet there were thousands more along under the skirting board. I tried to vacuum the eggs up but this required a lot of scraping with the hoover as the eggs were well stuck on. Even after a lot of vacuuming I still couldn’t remove all the visible eggs.

In order to protect the clothes I took them all to a laundrette in black bags. They were then hot-washed them to remove any eggs, the black bags were thrown away (in case they contained any moth eggs) and then the clean clothes were put in new black bags. I then took the clothes to my (non-moth infested) flat to keep them safe until the problem is sorted.

When it became clear that the home sprays weren’t able to get rid of them completely, the landlord was contacted who arranged for a professional to come into the flat. When the pest control guy visited he explained that the eggs are virtually indestructible. He said he would spray the carpet with a chemical that would kill any live clothes moths or larvae. The chemical would remain on the carpet for two weeks (no vacuuming in the mean time) killing any larvae which subsequently hatch. After two weeks the carpets would be sprayed again. He was very confident that this would get rid of the problem. We’ll have to wait and see.

The flat has now been sprayed twice with a two week interval. I have found out that the chemical is called Ficam W. After each spraying moths started re-appearing after 5-6 days. There will be a third spraying in a few days and maybe even a fourth!

The first two spraying failed to get rid of the moths so my friend decided to move out. I gather from the remaining flat mates that the moths are still there and the landlord didn’t bother to get a third spraying – even though it wouldn’t have cost him any more!

Unfortunately the problem is not over. It seems that the clothes moths have transferred to my friend’s sister and parents homes! Sometime in the next month or two I’ll probably try out one of those home fumigation kits that you can get at Robert Dyas to see if it will kill the moths. When I do try out the fumigation kit I’ll write a post about it.

I never did try the fumigation kit out. My friend’s sister moved to a new place – not because of the moths though. Occasionally moths are spotted at my friend’s parent’s house but as far as I can tell they haven’t taken hold there – yet.

If you want more information on what other people are doing about their clothes moths problem then I suggest you read the comments to this post. This has now become one of the most popular posts on this blog, and the post with the most comments. Clearly these creatures are causing misery for a lot of people!

I’ve uploaded a videos showing a carpet moth larvae, a carpet moth, moth eggs and carpet damage to YouTube – you’ll find it here – http://www.youtube.com/watch?v=mALtFjCLQIE. The quality of the video isn’t very good but it may help you to recognise them.

If you want to know more then do read the reader stories in the comment section below. Loads of people have been writing in to share their battles with the common clothes moth. Please feel free to share you own moth stories by adding a comment to my new ‘How to get rid of clothes moths‘ post.