After my first iPod died – a 4th generation 20gb one – I decided to have some fun and see what was in there. There are instructions elsewhere on the web telling you how to dissasemble and put your iPod back together (for battery replacement), but I’m not interested in saving it.

The iPod will die!

Safety first – if you are going to be forcing components open then you should wear protective goggles. Particuarly when opening the hard drive. I found that the actual platter shattered into very sharp pieces.

First up, how to get into the thing. When you look at it you can see that it is a pretty tightly sealed package. There is almost no gap between the white plastic on the front and the silver metal on the back. Using a very thin flat head screw driver to force it open is the way to go. I found that the area at the bottom of the iPod seemed the place to start. 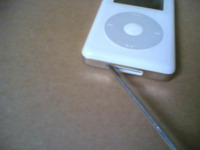 Once opened it looks like this. You can see the hard drive dominating the area on the left. 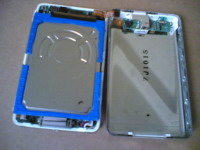 I wanted to get into the hard drive so I pulled it out and removed the protective blue plastic from the outside. The picture on the right is the hard drive to circuit board connector. 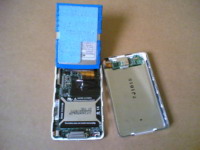 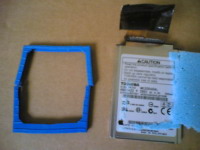 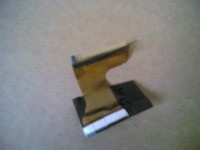 There are wierd screws in a five point star shape. However you don’t need to remove these to get inside. Just use a screw driver to force the package open. The hard drives internal circuit board was fastened with more five point star screws. I managed to undo some of them but I gave up on the last one and just ripped the circuit board out. 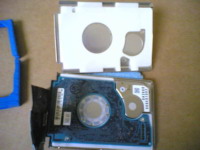 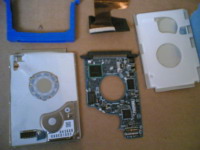 I still wasn’t able to see the hard drive platter. This was obviously sealed inside the other two pieces of metal. These were fastened tightly using those five point start screws. To open it I adoped a brute force method.

Warning: You really should be warning safety goggles at this point! Shards of the hard disk platter may fly out!

I inserted a large flat head screwdriver by each of the screws and turned it sharply to force each of the corners open. The result is on the right.

You can see the actual hard disk platter. It is amazingly reflective. Just like a mirror. You can see on the right of the platter where a few pieces broke off when I inserted the screw driver. These pieces are very sharp which is why you need the safety glasses. 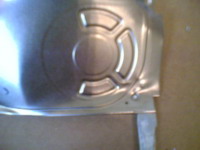 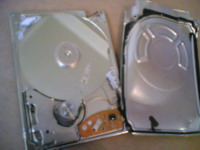 Not that I had destroyed the hard drive I moved back to the remains of the iPod. I removed the battery. 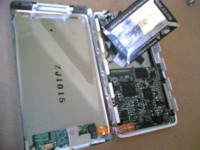 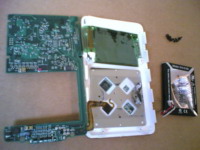 Next to be removed was the display. I found that after it was disconnected various lines would occasionally flash accross the display. 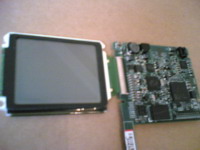 The click wheel mechanics are visible on the left. In the centre I’ve removed the metal cover. 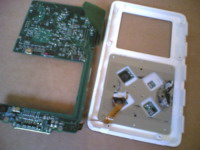 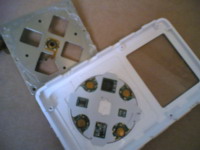 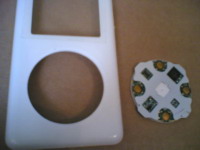 There’s not much left now. Left in the case is the headphone connector and on/off switch. 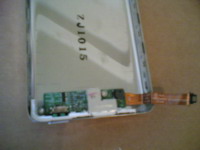 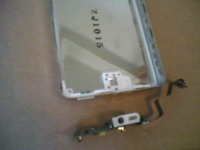 Finally all the bits laid out. There are a lot of pieces in iPod. You’ve got to admire those Apple engineers for managing to fit it all in. 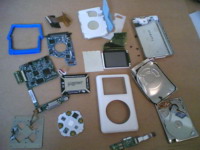