For over two months now I’ve been the owner of two different GPS devices, and I’ve had plenty of time to thoroughly use them whilst on my London Underground tube walking project, so I thought it was about time I reviewed them.

Both are headless GPS units – in other words neither have a display. And both are based on the SiRFstar III chipset. This chipset features a 20 channel receiver, meaning that in theory it can lock onto 20 satellites at once. In reality you are unlikely to be in view of more than 10 satellites at any time.

One of the devices is the GlobalSat DG-100 GPS data logger, the other is the Nokia LD-3W bluetooth GPS module. 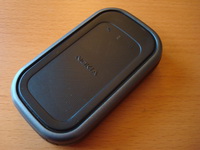 The first device I bought was the Nokia LD-3W. This is a very small unit, not much larger than a thick keyring. It is one button to turn the device on / off, and a socket to allow it to be charged. On its own this device is completely useless. To use it you need some bluetooth hardware and software to connect to it. I had bought it to use with my Nokia N80 smart phone . Nokia provide some really good free software that can connect to these kind of bluetooth GPS units.

Sports Tracker is an application for Nokia Series 60 (S60) based phones. It is produced by the Nokia Research Center. It will record your GPS tracks as you walk, drive, run or cycle. It has features to store your tracks and if you are into doing laps on a circuit it can keep track of your performance when you exercise. Stored tracks can be exported to your PC for analysis as GPX and KML. Your KML tracks can easily be overlayed onto Google Maps imagery so you can see where you have been. One cool feature is that as you are travelling you can see the track as a line on your phone display (but without a map underneath). You can also see statistics such as your speed, and you can see graphs of the data. 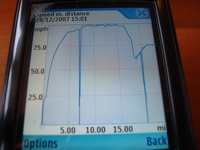 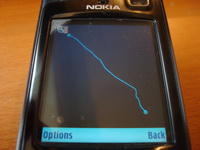 Nokia Maps is a free application that allows you to browse maps of many of the world’s countries. All the maps are free. They can downloaded on the fly if you have a fast data connection on your phone. This can be very slow so I’d recommend that you use the Nokia map downloader application to put whatever maps you want onto your phone’s memory card. The maps are fairly basic but this is a very useful tool if you are lost. Nokia Maps connects easily via bluetooth to the LD-3W.

Once the GPS signal has been acquired the LD-3W is good at keeping track of it. I’ve found that the unit can keep track of a good signal when the unit is in my rucksack, a car, train and even sometimes indoors. The big problem (which also affects the GlobalSat DG-100) is that it can take a while to acquire the initial signal when you first turn it on. If you try to acquire the signal whilst on the move then it can take ages – I’ve walked around for 10-20 minutes with the GPS units and not got any signal. I’ve found that to get the initial signal you really need to be stationary. What I now do is to place the unit on my window sill for a few minutes before I go out. This trick works well for both units. With the LD-3W you’ll need your bluetooth device nearby to initiate the GPS search.

In the box of the Nokia LD-3W is the GPS module and a car charger. Unfortunately there is no mains charger. It charges using the Nokia mini phone charger. Fortunately this is the same charger that came with my Nokia N80 so I was able to use that.

The box claims that the Nokia LD-W3 has up to 22 hours of operating time and I have no reason to doubt this. The problem is that you won’t be able to use the GPS module for this amount of time with a Nokia phone. Connecting to the GPS module by bluetooth burns the phone battery at a very fast rate. If you use it continuously you will probably get up to three hours of usage before your phone battery is used up. The GPS unit will keep going after this but it is useless without something to connect to it. 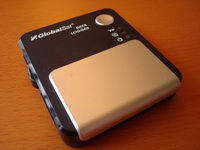 The GlobalSat DG-100 data logger is the second GPS device that I bought. I bought it when I realised that the N80 + LD-3W combination didn’t have enough battery power (the battery problem is with the N80) to be able to record a whole day’s walking route.

The DG-100 is a standalone data logger. When you turn it on it starts recording your positions. When you turn it off it stops. It doesn’t need to connect to any other device to be used. When you’ve done you days walking, running or driving you can connect it to your PC via its built in USB plug. You can then save the tracks in a variety of formats such as GPX and KML.

The supplied software is a bit weird but fortunately someone has written a better piece of software called DGManager that you can use to sync your tracks. DGManager will also allow you to GPS tag any photos that you have taken along your way. Below is an example of a track recorded with the DG-100 and then exported as KML using DGManager. The tracks from the Nokia LD-3W would look the same.

The battery life is up to 30 hours. The unit charges via the USB port. It comes with two rechargeable AA batteries. This is good as it means that you can carry a spare set of standard AA batteries with you if the unit were ever to run out of power whilst you are on the move.

It is hard to find real fault with the DG-100. It is not the most amazing looking piece of kit but that doesn’t matter. The supplied software isn’t great but that doesn’t matter either as someone decided to write their own software – DGManager. It does its job and it does it well. You turn it on and once it has acquired the GPS signal you can leave it and go for a walk, cycle, etc. When you come back your tracks are ready for you on the device. If it has a good signal (i.e. on a clear day) you can even put it in a front pocket or a rucksack and it should still be able to keep the signal – but if you do this I do recommend you check it regularly to make sure it is still tracking.

As I’ve reviewed two different devices and you’d expect me to tell you which is best. The problem is that they both serve different purposes.

If you want a GPS module to allow you to look at maps on your Nokia phone then the Nokia LD-3W is a well suited. If you want to be able to record your tracks as you explore then go for the GlobalSat DG-100.