I’m going to review it based my real world experiences of using it.

The Samsung N140 comes in a fairly compact box. If you are used to buying standard sized laptops then you’ll notice the difference in size and weight of the box straight away. 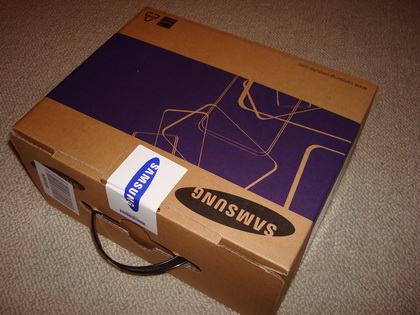 Inside the box is the N140 itself. At the time I bought mine there was a black version and a white version. I went for the black one. The exterior is made of shiny black plastic that soon accumulates smudge marks. When closed you can see the silver trim that goes round the N140. The silver trim is one of the few physical differences between the N140 and the N110.

I got the Windows XP version. If you buy it now then you’ll probably have to buy it with Windows 7. The N140 specs are fairly standard for a netbook. It has 1gb of RAM, 160gb hard drive, a 10-inch screen, and an Intel Atom N270 CPU. The big plus over many similar netbooks is its claimed 9-hour battery life for WinXP (7.5 hours for Windows 7). 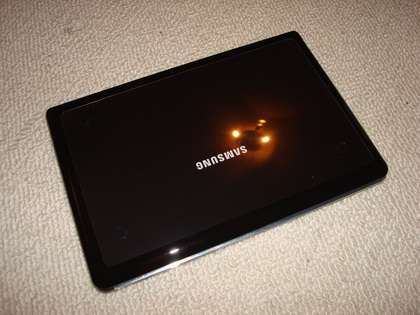 Also in the box are the battery, mains adaptor, a DVD, some basic manuals, and a soft zip-up case. 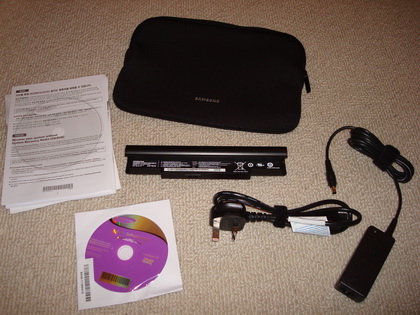 To get up and running you’ll need to plug the battery in, plug the mains charger in, and then turn it on using the slide switch on the front. The battery does bulge out of the bottom of the case but I have actually found the shape makes the netbook easier to hold when carrying it around, especially when it is in its case.

Setting up the Samsung N140 takes about an hour, as the initialisation process requires multiple reboots. You’ll have to decide how you want to split the 160gb hard disk space between the c: and d: drives (which requires a reboot). I went for a 51gb c: drive and a 91gb d: drive.

It needs another reboot to create a backup image of the initial OS contents onto the hard drive in case a full restore is needed. And I seem to recall that there were a few more reboots that were needed before the N140 was finally ready to use.

When it was finally ready to go I spent another hour or so installing my usual anti-virus and security software (Avast, Spyware Blaster, Rapport).

My only criticisms of the keyboard are that: 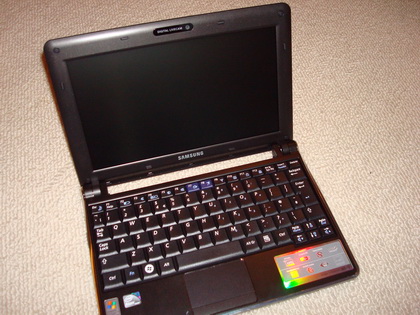 The screen resolution is 1024×600, the standard for a netbook. The image is sharp and the screen brightness is reasonable – the image doesn’t go as bright as my Sony Vaio but it is good enough for general use and usable outdoors.

One advantage the N140 has over the N110 is that the screen is matte rather than glossy. This vastly reduces the reflections you get in the screen and makes it easier to use the N140 outside.

If you are used to a desktop monitor then you may find the 600-pixel height to be a bit cramped. You may find it useful to turn off the Windows taskbar or learn how to make your applications go full screen. For example Internet Explorer and Firefox can be made full screen by pressing F11 – which makes browsing the web much more pleasant.

The one problem with the screen is that its angle of backward tilt is limited. The angle is fine if you are using the N140 at a desk. However if you are sitting in a chair with the N140 on your lap – as you might well do with a lightweight netbook – then you might find that the screen doesn’t go as far back as you’d like. 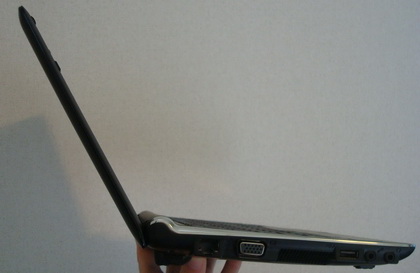 The area where the N140 stands out is its battery life. It has a claimed battery life of 9 hours and I find that when I use it for real (using several applications, WiFi, and with the screen brightness turned up) it certainly lasts at least 6 to 7 hours. If you were to reduce the screen brightness and turn on the power saving mode then I’m sure you’ll get more usage time out of the battery.

The battery is great as you can go out for a day with the N140 without needing the power supply. You can work on it for several hours, and whereas a standard laptop would be running out of juice, the N140 reports that its battery still has plenty left in it.

The weight is reported as being 1.33kg with the battery. Its size is standard for a netbook. I can easily slip it into my rucksack and still have plenty of room left for whatever else I want to carry. The weight is low enough so you can carry it around all day. I’ve even gone hill walking with it on my back!

The N140 has a built in webcam, microphone, and speakers, which makes this a great device to use with Skype. A headphone and a microphone socket are on the side should you need them.

There are three USB ports, two on the right side and one on the left. Also on the left side is a VGA output and network port.

WiFi and bluetooth are built into the model that I have and I’ve found the WiFi to be very reliable. The button to disable the WiFi and Bluetooth (for airplane usage) is a soft key rather than being a dedicated switch so you’d need to turn the N140 on in order to disable them.

At the front is an SD card slot and finally on the right is a Kensington security slot.

The trackpad is a reasonable size for a netbook like this and is perfectly usable.

I tend to use a wireless mouse myself as I’m not a fan of trackpads – I’ve bought a Trust wireless mini mouse with a micro sized receiver which takes up one of the USB ports. The receiver is small enough that I can put the N140 into its case without having to remove the receiver.

After having used the Samsung N140 regularly for two months here are my findings on how it copes with the kind of computing tasks I do. Please note that I’m basing my findings on an N140 that has been upgraded to 2gb of RAM rather than the 1gb that mine shipped with. In the background I have Avast anti-virus and Spybot Search and Destroy running all the time.

In conclusion the Samsung N140 is a great machine for computing when away from home or if you are happy to have a smaller screen.

The battery life is amongst the best available right now. The combination of screen, keyboard, and good CPU power (for a netbook) make this a very useful device.

I’d recommend upgrading the RAM to 2gb if you intend to run multiple programs at the same time.

I’ve had mine for two months now and when away from home have no regrets about leaving my main laptop behind.