A few weeks before leaving the country for a three month holiday I got a letter telling me I’d get a new debit card soon. Obviously I didn’t want it to be delivered in my absence so I went to the branch and told them that I didn’t want a new card to be sent out, and that I would re-order a card when I was back. The staff member did some typing away on the computer. I was assured by the staff member that no card would be delivered whilst I was away. 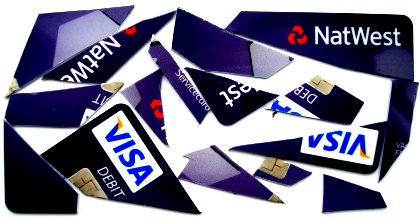 On returning from holiday I found that a new debit card had been delivered. I tried it and found that the card didn’t work. They had posted me the card and it was cancelled by the time I got home.

I went to the branch and waited patiently in branch for 20 minutes without being acknowledged or being told there would be a wait, whilst the customer service guy dealt with another customer.

When he finally served me he said that the card could not be re-activated. He said a replacement card would be ordered the next day and delivered to branch as I’d asked. I’ve had cards delivered to this branch many times before so I didn’t expect any problems.

A few days later a delivery man called at my flat, and gave me a letter. Inside was a NatWest debit card. I’d asked for it to be delivered to the branch, but here was a debit card arriving at my door.

I phoned the card activation line and they activated my card.

I went to the cash machine, put my card in, and typed in the PIN number. I got a message saying the card had not been activated and was now cancelled.

How can this be – I just activated it!

I phoned their customer care line and told them what had happened. The lady was very polite but seemed a little confused as the number of the card in my hand did not match the number on her computer. I asked her if she could see my card on the system. She could, but it was not the latest card!

After a bit of talking we figured out what had happened. The guy in my local branch had in fact ordered two cards for me at the same time. The first had gone to my home address, and the second was going to be sent to the branch.

When I called up the card activation line the lady activated the latest card (the one going to the branch, which I had not yet received). This was a reasonable thing for her to do as she wouldn’t expect there to have been two cards ordered for me. So the card which arrived at my home had not been activated which is why it got cancelled when I put it in the machine.

I said I was worried as their security system of activating the card when it arrives in the customers hand had not worked. Because of the mistake made by the bank employee my card was now active, but still in the post.

She said she would investigate and someone would call me back in the week. I gave her my mobile number as I was going to be out at work all week.

A few days later when I got home I saw a message on my home answering machine. It was someone from NatWest. Despite me telling her to phone me on my mobile she had called me back on my home phone. The message from the lady said that she would call me back tomorrow and she left a reference number.

I called the number and had to wait about 10 minutes to get through. I gave my reference number. The man who answered it gave me what information he could. He said he would add a note to the file telling the lady to call me back on my mobile.

The next day I arrived home and found another message on my answering machine. The lady had called me back on my home phone. It seems that telling them to call you back on your mobile is of no use!

I didn’t bother calling back this time. I decided I’d just wait until the weekend and see if my card turned up in the branch. During the week I got another message on my home phone telling me the card was on its way to the branch.

At the weekend I went to the branch, and finally was presented with a working debit card :)

Here’s a summary of what went wrong.

NatWest got there in the end (the staff were always polite and helpful with when ever I dealt with them), but there were far too many little human, and procedural errors along the way. I’m still a customer though!