At the end of May I wanted to cancel my broadband from Zen Internet because I was going on a long holiday to Japan. I’d worked out that despite Zen’s activation fee to re-connect, it would still be cheaper to cancel now and re-connect later, rather than keeping the connection while I was away.

Zen have always been a reliable broadband ISP, who consistently get good reviews, so I expected the cancellation process to be smooth. I logged into the Zen Portal and went to the Cancel a service area.

It is mostly straight forward. You just need to remember that after creating the cancellation request you have to submit it as an extra step. It would be easy to create the cancellation and think it was done. The earliest it can be cancelled is 14 days from when you submit the request, but you can select a later date if you want.

In the reason for cancellation I wrote “Going on a long holiday, cheaper to cancel and reactivate, then cancel and keep the service while away”. I’ve highlighted my reason in red. 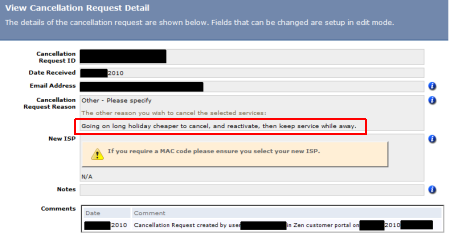 The cancellation request was now live in the Zen customer portal.

Five days later I got an email from their cancellations department telling me that I needed to give them a call to confirm a few details.

Unfortunately I was already in Japan so the 0845 number that they gave me wasn’t very useful – you can’t call these numbers from abroad. I didn’t have a convenient telephone either, and with the 8 hours time difference giving them a call for what should be a straight forward cancellation was inconvenient.

I sent them an email explaining I was abroad and I gave them a few extra bits of information answering whatever questions I guessed they might ask. (1: Yes I did want to cancel, not migrate, 2: I don’t need a MAC code, 3: any refund can be paid into the same bank account as the one I pay them with).

I also asked for the international version of their phone number in case this didn’t answer their questions.

Three days passed and no reply.

I decided I’d have to call them. This would mean having to use Skype as I didn’t have a convenient phone line. The call would cost me Skype credit, and I’d have to wait until the evening due to the 8 hours time difference. I found the non-0845 number on their website.

I called and tried to get put through to the person who sent the email. Unfortunately the line quality was very bad and the voice connection kept dropping (very common for international Skype to phone calls).

I managed to hear the lady saying she couldn’t hear me so she’d call me back. She then hung up. Doh! The only number she would have is my UK number, which isn’t helpful when I’m in Japan!

I tried calling a second time. This time I got through again and the call quality was a bit better. I managed to explain who I needed to talk to. The person wasn’t available but the lady looked up my details and found out what information was needed.

I politely told her that the reason for my cancellation was because I’d gone abroad for a bit and so didn’t need the broadband. This done I crossed my fingers that all would go well.

The broadband is cancelled

I got an email soon after telling me that I’d got a credit note for £1.67 which was the amount of refund I was owed. I had said in my email to them that I wanted any refund to be paid into my bank account, but obviously they hadn’t read that.

The cancellation request also got updated over the next few days as things progressed. 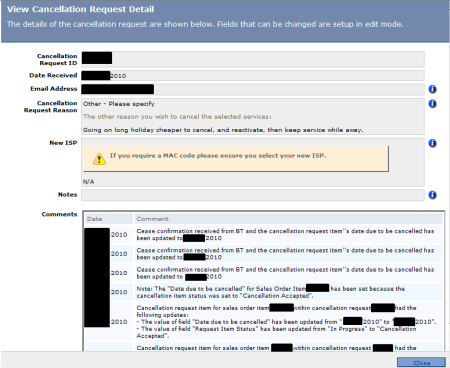 And on the date the service was to be cancelled I got an automated email telling me that it had been done. Success – of sorts!

Once cancelled you can still access the Zen customer portal. This is handy if you want to re-activate later, or order a different service. From the portal I can also see my credit note. I suppose I’ll have to email them again if I ever want to spend that £1.67.

Summary of what went wrong

As a broadband ISP Zen have been very good. It seems that they are highly regarded from all the good reviews they get. But even a good company can cause problems for its customers if they are careless.

In my case it looks like they didn’t read my very simple reason for cancellation. Obviously any company wants to know why it is losing a customer, but if that customer is going abroad for a while then there should be no need for further questions. Certainly no need to ask why I’m leaving when I’ve already told them!

Having missed the fact that I was going abroad they sent me a slightly vague email telling me to contact them. They gave me an 0845 number, which if they’d spotted that I might be abroad they’d have known that the 0845 number wouldn’t work for me.

Then they failed to answer or acknowledge the email that I sent to them with an explanation of why I couldn’t call their 0845 number, and re-iterating the reason why I wanted to cancel.

This then forced me to call them twice, from abroad using my Skype credit. The calls didn’t cost too much, but they were unnecessary.

My advice to them – make sure you read the ‘request for cancellation’, and reply to your emails!

As for whether I’ll go back to Zen – maybe – their service was reliable, and I like the fact that they don’t force you into a long term contract. I know that any company can make these mistakes, and at least it wasn’t too difficult to sort out.

Overall – they are good, but not perfect. There’s room for improvement if they want to keep getting those awards.

Update: July 2010 I’ve found out that they sent a letter to my home address asking where I wanted the refund to be paid. Again not a great idea as I’d told them I would be abroad! I only found out when someone visited my flat. If their system was perfect they should have spotted that I’d be abroad and emailed me instead – or perhaps they should CC all letters to your email address to increase the chance of you seeing them.