If you used to have an Amiga then you’ll probably remember Silica who produced regular mail order catalogues that could take an afternoon to get through. I had an Amiga 600, upgraded to 2mb of RAM, and with an external 200mb hard drive! It was one of those hard drives that was moulded to fit the Amiga 1200, so it didn’t look quite right on the Amiga 600, but it did the job. I still have that Amiga, and it still works! 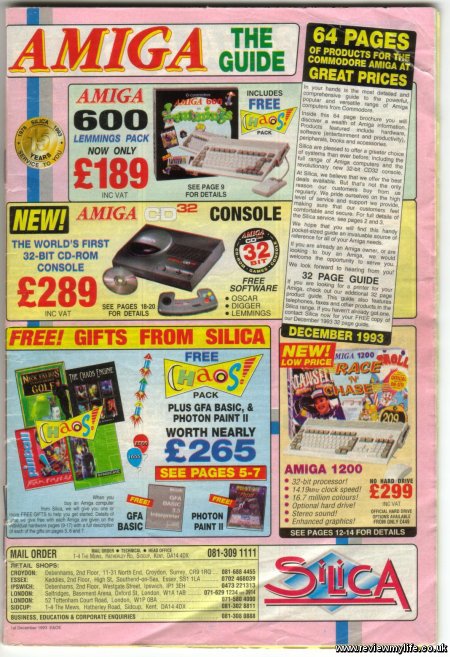 I found one of the Silica Amiga mail order catalogues from December 1993. It is 64 pages so I can’t reproduce it all, but I’ve chosen 8 pages to display. On the cover is the Amiga 600 Lemmings pack for just £189. Like many great games Lemmings was originally developed for the Amiga. Also on the cover is the Amiga CD32 console, and the Amiga 1200 Race ‘N’ Chase pack. The most popular ‘home’ Amigas (500+, 600, 1200) usually came bundled with games and applications in these themed packs.

Here’s the Amiga pack I got – the Wild, Weird and Wicked pack. It came with the Microprose Grand Prix simulation which gave you all the ‘thrills’ of Grand Prix racing despite the animation only updating 2-4 times per second. 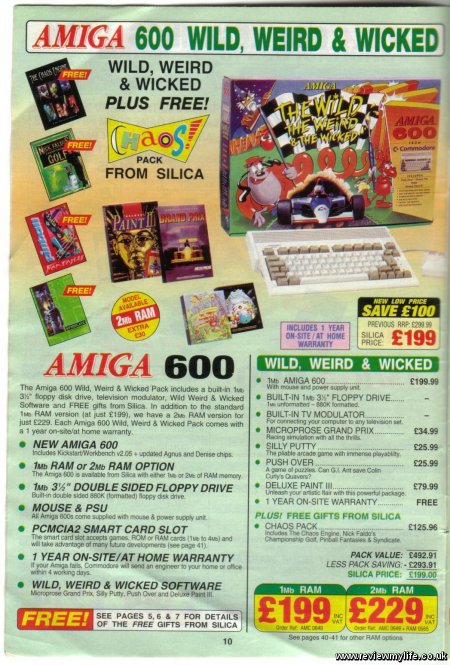 Push Over was a brilliant platform puzzle game where you had to arrange dominos in the correct order, and push them over. But these were no ordinary dominos; they could split in two, explode, fly up, and more, a really creative idea. I did eventually complete it! Silly Putty was a arcade platform game where you controlled a blue blob of Silly Putty. It could stretch, punch and jump its way around the levels.

The Amiga 600 wasn’t just about games though, also included was Deluxe Paint III. Deluxe Paint was an amazing paint package, which had powerful drawing features that I’ve never seen on any paint package since. The 3D rotations, and animated brush features could help to make really great artwork, despite it only supporting 32 (or 64 in the Extra halfbrite mode) colours. 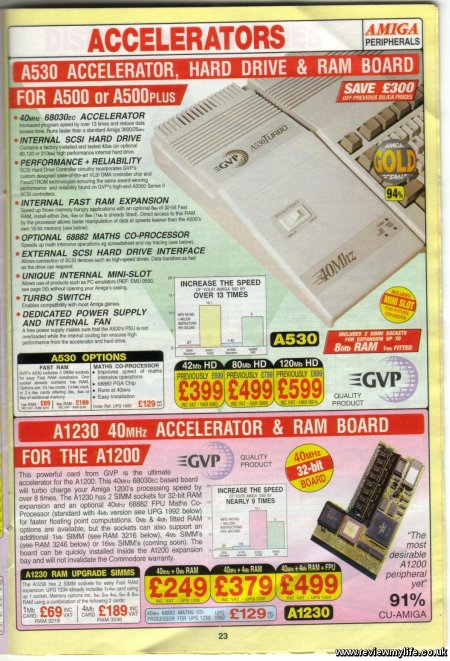 I had a similar add-on for my Amiga 600, but it was just a hard drive. There was no practical way to make the Amiga 600 go faster.

Here is the Amiga dream machine – The Amiga 4000-40. It had the top rated 68040 processor at 25MHz. At the time this was a real PC beater. Commodore had their chance with the Amiga 4000 to compete with the big PC makers at the time. But unfortunately they blew it. 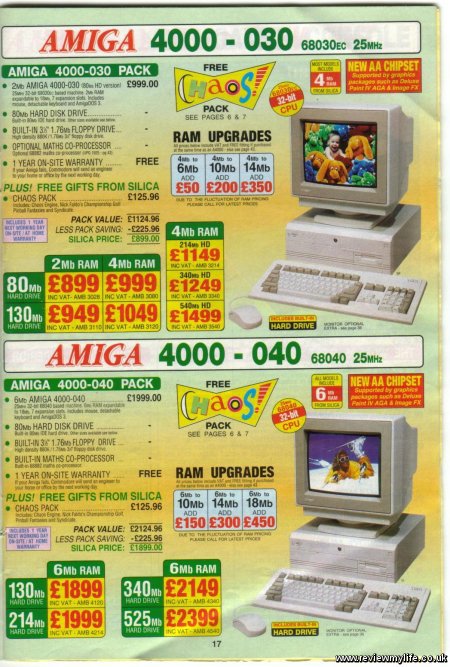 Another machine that was great on paper was the Amiga CD32. 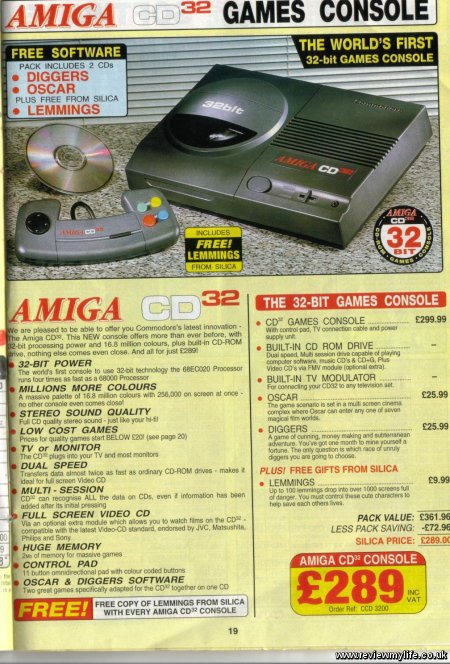 It was a very powerful games machine for its time, but Commodore had manufacturing problems, and other big financial problems, which lead to it being discontinued shortly after release. Here you can see some of the ports that it had, and a comparison against the Sega Mega CD. 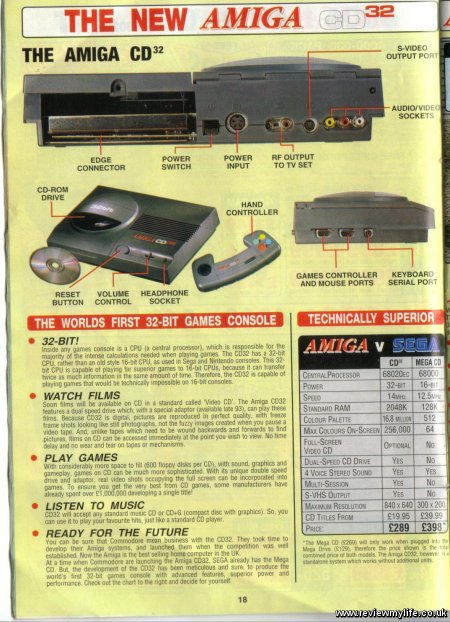 These catalogues also had plenty of games in them. The Amiga could be a serious work, music and graphics computer. But for many it was a games machine. 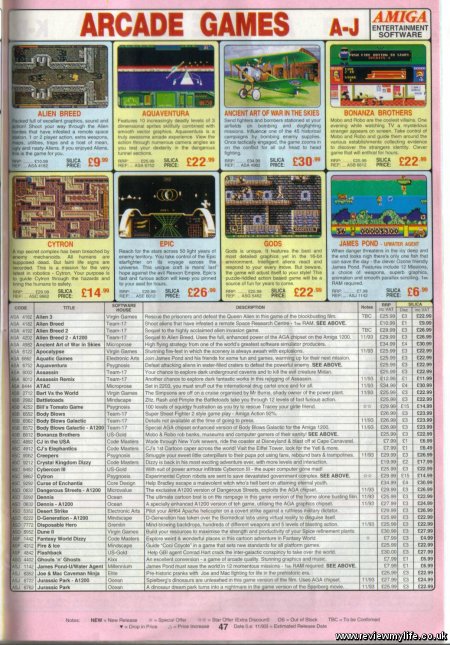 It had a lively book scene too. Many programmers of my age today probably got their first taste at programming on the Amiga. It had good beginner’s languages such as Amos and Blitz Basic, and plenty of opportunity to code lower level using C and assembly language. This was an age when many games programmers coded exclusively in assembly! 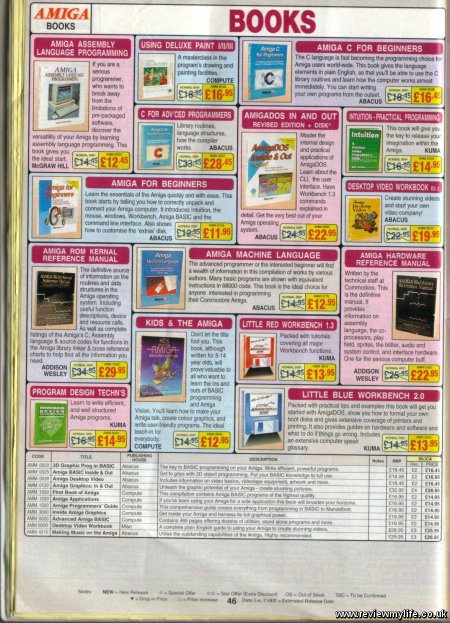 Someday I’ll power my Amiga 600 back up and write some more about it.