After flying from Takamatsu Airport we arrived at Naha Airport and got the monorail to the city. We had three full days, staying at two hotels; the Hotel Rasso Naha Tomari and Hostel Burney’s Breakfast (more about them in a future post).

Shuri Castle is one of the main attractions in Naha city. The entrance is about a 15 minute walk from the last stop on the tram. It was destroyed during World War II but much has now been rebuilt. More rebuilding is still on-going. 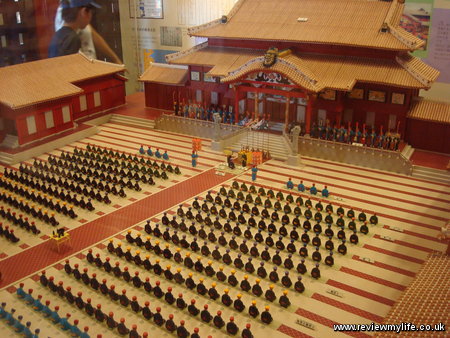 There are steps in and around the castle so on a hot 33/34 celsius day it is tiring!

You can probably spend about an hour here if you take your time. There is a café and restaurant area where you can fill up before moving on.

At the other end of the city is the Fujushu-en Chinese Garden. It is free to enter and you can spend a pleasant half an hour looking at the plants, flowers, statues and water features.

The former Japanese Navy underground headquarters saw action during World War II. The tunnels have now been renovated and opened. Getting there is a bit of a mission as the entrance is on top of a hill. You might want to get a taxi here and back.

There is a museum in which there are exhibits (in English) about the tunnels and Rear Admiral Minoru Ota who along with six other officers killed themselves near the end of the war. The museum is good but I thought they should have given a proper explanation of how Japan entered the war to put the events in these tunnels into context.

The tunnels themselves are very interesting. They were dug by hand using pick axes. You can see where the soldiers lived and worked. They are fairly bare but there are some pictures on the walls to help you imagine what they are like. The photo below right shows some of the damage done by a hand grenade.

If you are going to the Ocean Expo Park and are a fan of pineapples you might want to visit Pineapple Park which is close by. At Pineapple Park is a ride which takes you round a pineapple plantation with commentary (there is English audio available).

There are some exhibits about pineapples (and also about sea shells for some reason!). Then there is a large shopping area where you can buy all kinds of pineapple cakes, sweets, wines, and drinks.

Along the way you can eat various pineapple foods. They say that you can have ‘all the pineapples you can eat’ but they give the pineapple chunks, cakes and drinks to you in very small portions, so you aren’t likely to overdose on them!

This is a fun stop off on the way to the Ocean Expo Park, and children will like it.

The Ocean Expo Park is at the North end of Naha. It has an aquarium, beach, museums, and gardens. It is a long way from Naha city (1.5-2 hours) and the different areas in the park are some distance away from each other. The best way to visit it from Naha city is to hire a car and drive there.

In the Ocean Expo Park is the large Okinawa Churaumi Aquarium. It is a modern and well designed aquarium with all the kinds of fish and sea creatures you’d expect at an aquarium of this scale.

One of the highlights is the huge 7500m³ Kuroshio Tank which has hundreds of fish, whale sharks and mantas. 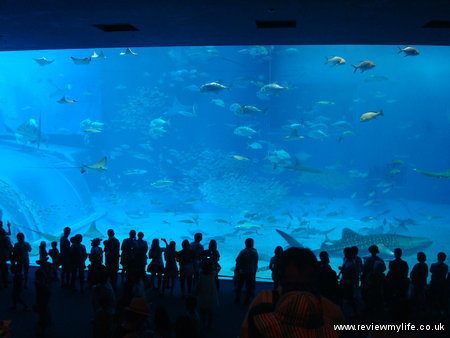 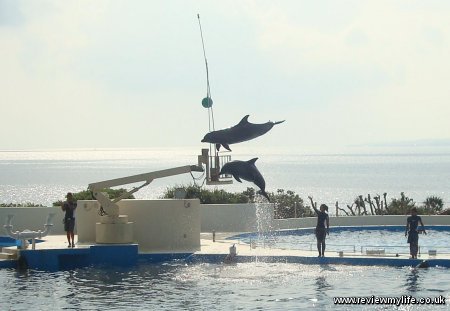 The Tropical Dream Center is a botanical garden in the Ocean Expo Park. You get a discount on entry if you have visited the aquarium. They have many green houses containing tropical flowers and plants. There were a large number of tropical fruits when we went there.

There is a building (below, left) that you can go up to get a good aerial view of the park and the sea.

Kokusai dori is a big shopping and restaurant street which is busy during the day, and which becomes more lively at night. It is a good place to go for food in the evenings.

The Heiwa dori (in the photo above) is a big covered shopping area selling cheap clothes, trinkets and other goods. At the end of the Heiwa dori is the old pottery area.

This is what we did on our three full days in Naha.