Peter Kaltstein, Software Developer, talks to reviewmylife about the NatAmi project and the Amiga computer.

1. What is the NatAmi project?

NatAmi stands for Native Amiga and is a reimplementation of the former Commodore Amiga design, aiming at more performance while still keeping low level compatibility. The original concepts are strongly tied to DMA and multiple programmable special purpose chips. 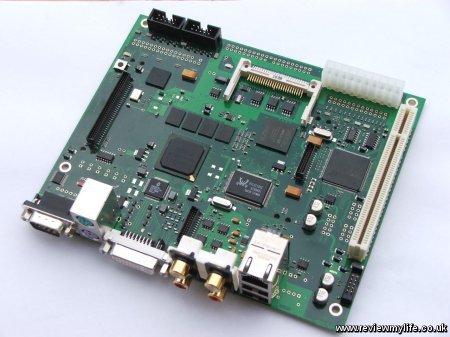 Thomas Hirsch started with his idea in 2003, first as an Amiga compatible disk controller that evolved into a full AGA Amiga implementation by time. His main motivation was that he wanted to have Amiga back, but also the technical challenge itself.

2. What is your role and how did you get involved?

I met Thomas first, when we were both working in a computer company in Böblingen in 2007. Seing his early prototype in action convinced me to join to help revive the Amiga.

Because of my Linux skills, I have set up the Natami server and development infrastructure – both for public and team internal usage. We use IRC, TRAC and Subversion to synchronize work. As a software developer I am looking forward to getting my Natami MX-board soon, when OS & application development can start.

3. Who are the key people involved in the project?

Thomas is the PCB and chipset designer. The 68050 is done mostly by Jens and Gunnar. Andi, Keith, Jens, and Gunnar wrote 68k testcases for it. Many team members joined and helped the project: Bartek did the graphics for the 2D demo game prototype and web banners, while Guillaume is a professional musician and contributed his own compositions for Natami. Additional members help on programming and more.

4. How was the hardware specification for NatAmi decided?

The 1st design based on 68060 originally included the CPU socket and SDRAM. Since this design would have been very expensive it evolved into a more modular concept and also switched to DDR2 memory.

Jens and Gunnar started developing a softcore 68k highend CPU, that is included into the same FPGA containing the Amiga compatible chipset. This makes the CPU-card with a physical 68060 optional. 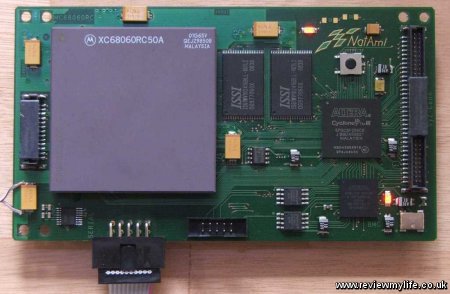 5. How do you organise the work amongst yourself?

Since this is a spare time project, we organize work items in the internal side of the web forum and on IRC.

6. Are you getting any input from the original Amiga designers / programmers, or are you working everything out yourselves?

Everything is done by ourselves based on public specifications.

7. How do you go about designing the chipsets to be compatible with the original Amiga chipsets?

We can’t give a compatibility percentage yet but any game that already runs on a 68060-AGA-amiga is very likely to run also on Natami. With WHDload there is already a project improving compatibility of the old games and this project also helps the games on Natami.

8. What are the most challenging parts of creating NatAmi?

It is difficult to name only one but here are some examples: For Thomas a lot of effort was needed in adapting the Amiga chipset to make use of a pipelined DDR2 memory controller. As another example Jens spent quite some effort on an efficient CPU-cache design on the N050.

9. How is the NatAmi project financed?

Everything is financed privately. Thomas payed all the prototypes and parts he ordered for stock by himself. However the biggest sacrifices are the working hours spent. Since the journey is the reward, this makes a project possible, that otherwise would only be possible with a big investor.

10. How and when will Amiga fans be able to get hold of a usable NatAmi retail device?

Currently Thomas is ensuring that all components on the MX-board are working. Afterwards the board can be distributed first to team members and then after additional testing and driver development to the public. Please understand we can’t provide an exact date yet, but we will publish on www.natami.net in our news blog, when ordering can start and provide more info when the team-internal board testing starts.

11. Will Amiga fans that have old games or applications on 3½ inch floppy disks be able to use them with NatAmi?

3.5″ disk games already booted on the 1st Natami prototype and are still supported on the latest board, the Natami MX. However many will probably prefer to copy them to harddisk-images or use a compact flash onboard.

12. What do you think the retail NatAmi device will look like?

As of now the Natami MX design with its current configuration is decided to be the board that will be sold. Additionally to the LX the MX features Gigabit LAN onboard and also USBv2.

13. Why is the Amiga still relevant today?

The OS and hardware were extremely sophisticated at its time and very much superior to the x86-PC. People have different reasons for wanting Amiga back. Replacing still used Amigas with a full compatible successor can be one. Another aspect of the retro-movement might result out of the fact that current systems appear bloated and are not always fast to use, despite of having several GHz of CPU clock and lots of memory.

Since AmigaOS is very fast, light-weight and friendly to use and was so much ahead of its times, it still can be a nice niche platform not only for retro-gaming but many other tasks and to develop for. On the Amiga a programmer has low level access to the hardware which is an interesting challenge and very efficient.

14. What Amiga’s do you own, and what was your favourite Amiga?

I still own an Amiga 4000 desktop. My machine history before is A1000 and A2000. Actually every Amiga I owned was great at its time for me, but I have to admit, that up from 68060 times on, I also started using Linux and continued to use it on PowerPC.

For more information visit the www.natami.net website. Photos used with permission of the NatAmi team.