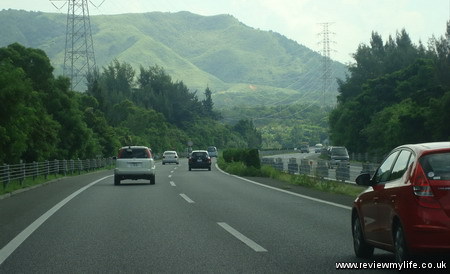 Also I got my licence in Takamatsu – the procedure will vary in other parts of the country.

Translation of my British driving licence

To start with I needed a translation of my British driving licence. You can get one of these for ¥3000 from your local JAF (Japan automobile federation) office.

The procedure is pretty simple; you turn up – no appointment was necessary, fill in a simple form (name, address, telephone number), and give them your driving licence. They only needed my photocard, they didn’t need the paper counterpart. They then took about 30 minutes to copy the relevant information from the photocard to a standard form on one or two pieces of A4 paper. 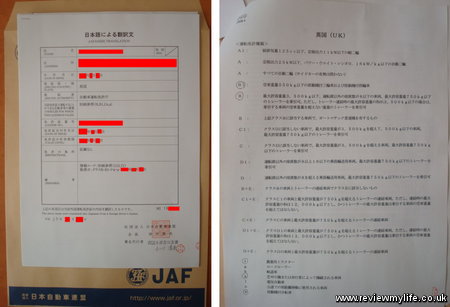 There is more detailed information on the JAF website.

This is the stage which could vary a lot depending on where you are from. With my UK driving licence I was only required to be interviewed – I didn’t need to take a driving test.

I had to get the appointment booked in advance at the Kagawa driving licence centre which is a 25 minute walk North of Kozai station (one stop to the West of Takamatsu main station).

The interview was going to be in Japanese so I took a friend along to translate for me. Once at the driving licence centre I was seen by a lady who spent over an hour asking me many question about how I learnt to drive and my driving experience. Here is a selection of questions that my friend and I were asked at both of our interviews.

I’d left my paper counter part back in the UK, and she did ask about it, but she seemed to accept that the photocard was sufficient. To be safe it is probably best if you bring your paper counterpart along with you as well, in case they insist on it.

And even more questions which I don’t remember! But hopefully this gives you an idea of the style. Once it was finished I was told that they’d phone within a week to tell me if I’d passed. If so I’d have to go back to the driving licence centre for an eye test and to pay. There was no charge to be interviewed.

Getting my Japanese driving licence

A week later I was told that I passed the interview so I was asked to go back to the centre the next week before 2pm.

After I got there and checked in at reception a man collected me. I had to verify my details on another form. And I had to choose two 4 digit pin codes (both could be the same). I’m guessing you might need them one day to prove you are the licence holder so note them down. He also checked my foreigner registration card and UK driving licence. And he took my UK driving licence translation (I didn’t get to keep it).

Then I given two A4 forms and had to go to a counter to buy revenue stamps for them at a cost of ¥5000. The lady behind the counter put the correct stamps on the correct forms. I also had to put my name and address on both of these pieces of paper.

Next I had to get photos from a photo booth. It printed out a sheet with two large photos and two small photos.

The man found me and we went back into the office. He put one of the small photos on a form, and the other three photos were mine to keep.

Then he took me upstairs for the quickest eye test I’ve ever done. In a small room was an eye testing machine and an operator. There were two types of test. The first was a Landolt C test where you are shown circles with a bit missing. I had to look through a window in the machine at a grid of these circles which were different sizes. The operator would light up one of the circles and I had to say whether the missing bit is on the top, left, bottom, or right. He let me say the answers in English. There were about 5 or 6 of these circles that he lit up. Some are quite small.

The next test was a colour blindness test. Using the same machine he would light up two colours. I had to say what the colours were. E.g. red and green. Orange and red. Again he let me give the answers in English.

The whole sequence of boths test can only have taken about 30 seconds. I got what I believe is a very good score!

The the man who had been acomponying me took me to another counter where I had to hand in the form which my mini-photo on it. He then left me while they processed the form.

About 10 minutes later they gave me a print out which I had to check. The Katakana version of my name was spelt wrong so they had to make a correction (I think the man’s handwriting hadn’t been very clear).

With the corrected form I then had to go to another area where another man took a photo of me using a fixed digital camera.

After this it was back downstairs to the waiting area.

Another 5 minutes later the man who had been making sure I went to the right places came out with my licence. I just had to sign for it and then I could leave with my brand new laminated Japanese driving licence. 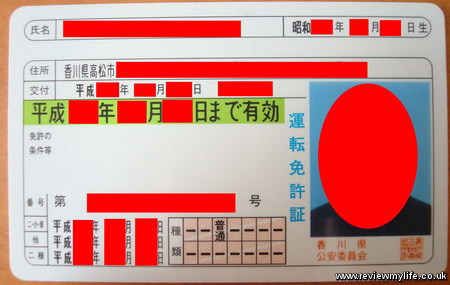 Changing the address on your Japanese driving licence

You need to go to a proper police station – they can’t change the address at the police koban boxes that you see all over the country. At my local police station there was a separate entrance for the driving licence centre. It was open during office hours 9:30-12:00 and 13:00-16:00. You have to fill in a simple form and show your alien registration card. 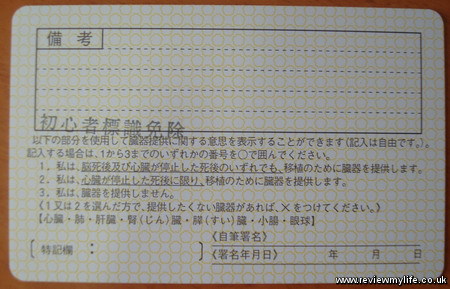 Then they print your new address on the back of your driving licence in the box above (the photo was taken before I changed my address) and your licence is now up to date again.

14 Comments on “Getting a Japanese driving licence”