Anyone who stays in Japan for more than 90 days must register as an alien with the local government within 90 days of arriving in the country.

When I arrived at Osaka Kansai airport on a Japanese working holiday visa I was reminded of the need to register by being given a leaflet about the alien registration process by the man on the immigration counter. 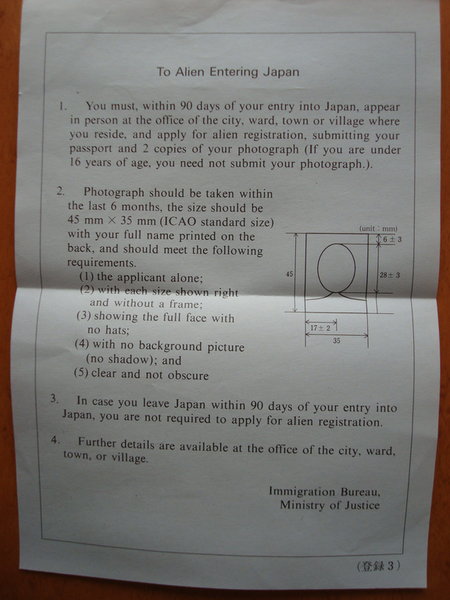 A few weeks later I went to my local government office in Takamatsu 高松 with my passport and two passport sized photos. In Takamatsu the counter for alien registration is number 0. I took a ticket and waited my turn – it only took a minute before I was seen.

Unfortunately the man on the counter spoke no English, but fortunately I had brought along my friend who spoke some Japanese.

Filling in the alien registration form

The man went thought the Japan alien registration form with us (you can see and example here. He wanted some parts to be filled in very precisely.

Most of the other fields are fairly self explanatory.

After doing a bit of photocopying and other paperwork I was given back my passport with a new stamp in it. 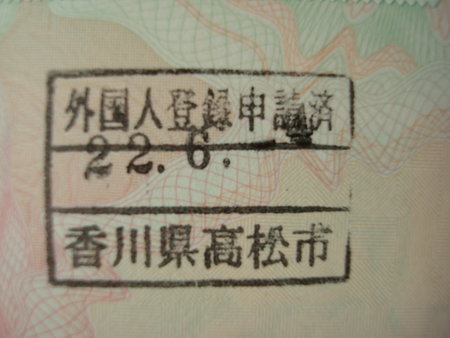 I was also given a form giving me the dates of when I could collect my alien registration card. This was to be in about two and a half weeks time. 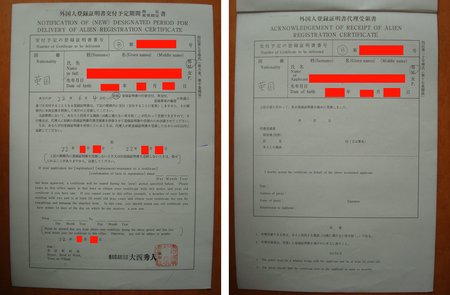 If you need to prove your registration before getting the card (to open a Japanese post office bank account for example) you can pay extra to get a proof of registration certificate, but this does cost extra.

Going through the alien registration process needed quite a bit of assistance from the Japanese speaking man so it was good that I took someone with me. If you register in a big city like Tokyo or Osaka there will be a higher chance of finding English speakers in the office.

If you need help with translation the registration office might be able to tell you how to get a translator. In Takamatsu you can arrange to have a free translator from the iPal International Exchange Centre accompany you.

Collecting the alien registration card was extremely simple. I just had to go back to the same counter and hand back the dated form that I had been given when I registered.

The man got my card out of a cupboard, and gave it to me, along with a small leaflet with some extra information on what to do if I need to change any information, lose the card, or leave the country. 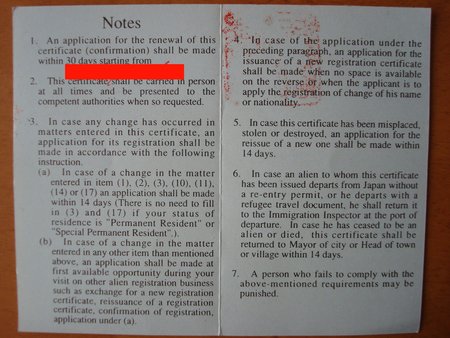 If you move or if any of the other details on your alien registration card change (e.g. getting a new visa / change of status), you will need to get your alien registration card updated within 14 days. You can do this at a local government office by filling in a form and handing in your card. They can usually process the application and update your card in about 20 minutes. They write the updates in the space on the back of the card.