Whilst on holiday in South Korea I went on a tour of Panmunjom and the demilitarised zone by the border of North and South Korea. 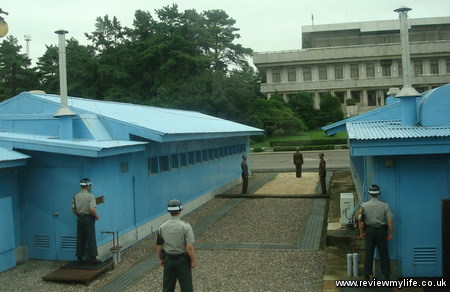 There are lots of agencies running similar tours, and there are differences in what places you see on each tour. I booked about a month in advance via email for the ‘DMZ & Panmunjom’ tour run by the Panmunjom Travel Centre. They run several different tours, the one I went on was known as the ‘combined’ tour as it visited the DMZ and Panmunjom.

The day started shortly after 8am by registering at the Lotte Hotel in Seoul. The tour cost 120,000 Won (about £65) which I paid on the day, and after they checked my passport I was given direction to find the bus.

About 80% of the people in the bus were Japanese, and they’d separated the English speakers out and put us at the back of the bus so we could get English commentary. As the bus rode northwards the tour guide gave us some background on the Korean war and how the DMZ was created. She also explained about the security procedures that would take place once we reached the DMZ. On the bus was a lady who had defected from North Korea and we got to ask her questions before we reached the DMZ (she wasn’t allowed in this area). 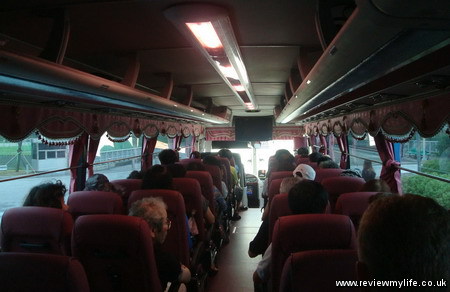 When we reached Camp Bonifas (named after a soldier who was killed by the North Koreans in 1976) a South Korean soldier came onto the bus to accompany us for the tour. He checked our passports and also had a look at what we were wearing. One of the other English speakers (an American) was singled out because he was wearing a t-shirt with an American theme. The tour guide explained that the soldier wasn’t happy about this. North Koreans don’t like Americans, so wearing this t-shirt would draw attention to him. Luckily they carry some spare clothes on the bus for people who are wearing the wrong kind of clothing. He was given an ill-fitting shirt which he had to wear whilst in the areas that would be in sight of the North Korean guards.

We drove through the DMZ and saw soldiers on the way, most of them lightly armed with just hand guns. When the bus reached the Joint Security Area (JSA) in the village of Panmunjom we got off and went into the Freedom House to watch a video about the history of the area. 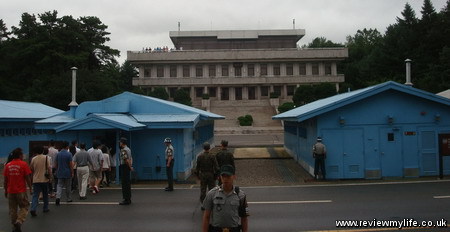 The blue ‘sheds’ straddle the border, and there is a small concrete block inbetween them which marks the border position. We were allowed to go inside the one on the left which is the MAC Conference Room where both sides can meet. 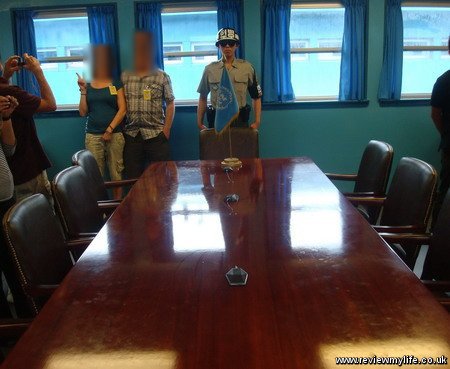 Inside the conference room we were allowed to walk its full length crossing the line that marks the border. The border goes through the middle of the conference table. We were allowed to have our photo taken with the UN soldier who is in his ‘taekwondo pose’ but we were under strict instruction not to touch him – one lady got told off for trying to touch his arm while posing for a photo! 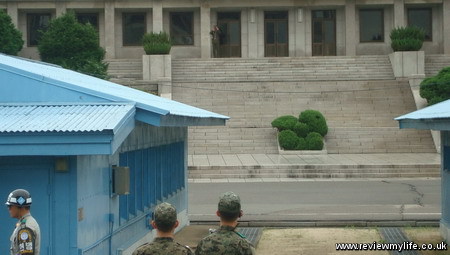 This below shot shows the classic poses of the two sides. On our side two UN soldiers have positioned themselves so they are half covered by the conference rooms. This is to give them cover, and also to allow them to signal back to our side without being seen by the North Koreans. On the North Korean side two soldiers face each other, the idea being that if either of them tries to cross the border (a mere foot away from where they are standing) they other will shoot him. The North Korean soldier who is facing away from the camera is there to try to make sure no one else from North Korea tries to defect.

We got back on another bus (a so called military bus – but it was just a bus, nothing unusual), and were acomponied by both our South Korean soldier and another military vehicle as we drove around some of the other sights in the JSA including the ‘Bridge of no return’.

The bus then drove to the ‘Imjingak Tourist Resort’. There are a selection of sights here such as a peace bell, memorial altar and this ‘freedom bridge’. 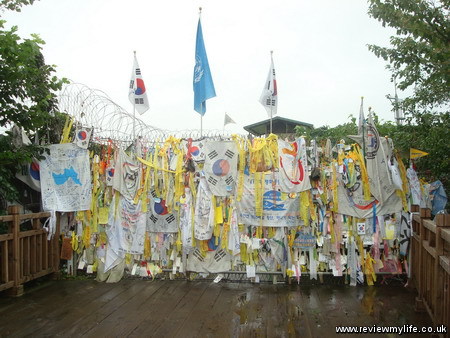 We had lunch at a large Korean restaurant that seemed set up to receive coach groups. I’d requested a vegetarian meal in advance and so had a tasty vegetarian bibimbap.

After lunch we went to the Dora Observatory from where you can see the village of Kijŏng-dong, which the South Koreans call ‘the North Korean propaganda village’. The North Korean flag may only be a few pixels wide (towards the upper right) in my photo but it is huge and weighs 270kg.

They have a rule here that you can only take photos behind the yellow line. The only way to get a decent photo is to hold the camera above your head and keep taking pictures until you get a good one.

Next we went to the ‘3rd Infiltration Tunnel’, the 3rd such tunnel that the South Koreans had discovered. The North Koreans have dug many such tunnels over the years across the border. The tunnels were dug by hand and dynamite. 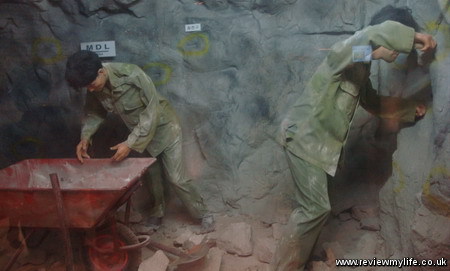 You can take a small train down into the tunnel to have a look. No cameras are allowed in the tunnel so I only have a photo of the train. The actual tunnels are cramped and very roughly cut from where the rock has been dynamited.

Our final destination before heading back was Dorasan Station. This station was built to connect North and South Korea but was only used briefly before the North Koreans closed the border. 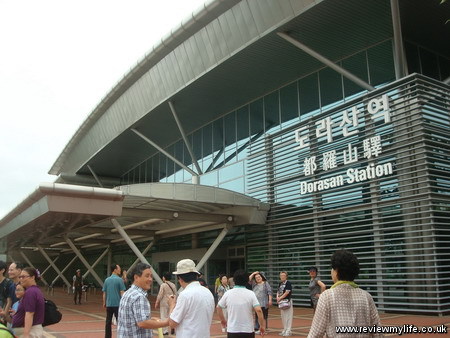 Now it is just a touist attraction. You can buy a platform ticket to go through the doors to Pyeongyang and walk on the platform. 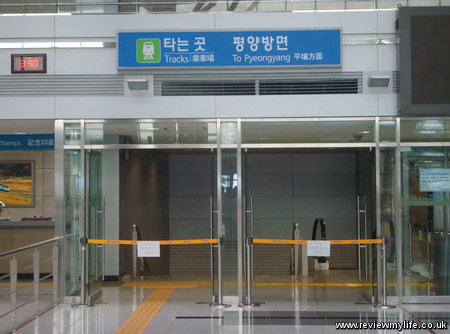 This is the very quiet platform of Dorasan Station looking in the direction that trains to North Korea would travel. 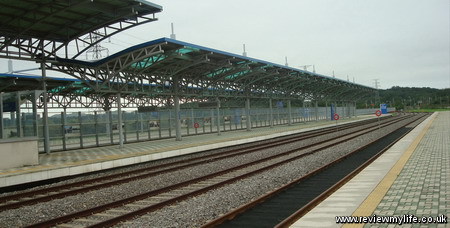 After having seen the station we got on the bus for the final time back to the Lotte Hotel in Seoul. Overall the trip is well worth going on. It is expensive, but it isn’t possible to see all these sights unless you go with an organised tour. Before booking a tour make sure it visits the places you want to see as not all of them go to the same areas.

4 Comments on “Panmunjom, DMZ and seeing the North Korean border”