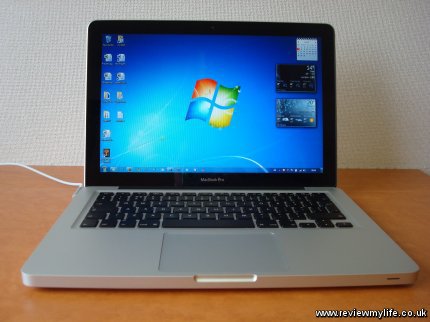 Some parts of this review would be applicable for running Windows 7 on any Mac, but other parts may be specific to the 2010 MacBook Pro 13 inch.

Installing and setting up Windows 7

I installed the 32 bit edition of Windows 7 rather than the 64 bit version on the assumption that more 3rd party software and drivers would be compatible with the 32 bit version. 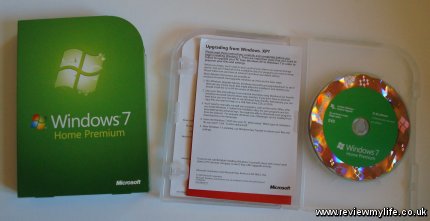 On a previous post I’ve put links to the Boot Camp install instructions. And if you want a writable shared partition I’ve written up my own instructions for how to add a third shared writable partition to your MacBook hard drive.

By default the MacBook will boot into Mac OS X. If you hold down the ‘alt’ key when you turn it on you will get boot selection screen in about 10 seconds that will allow you to choose to boot from either the Mac OS X partition or the Windows 7 partition. 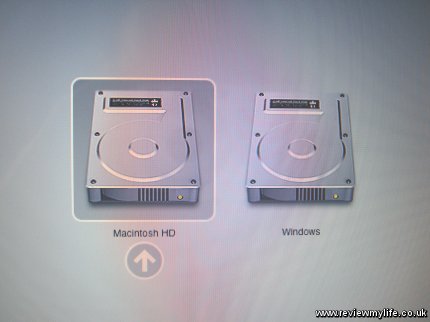 On choosing Windows 7 it then takes my month old install of Windows 7 48 seconds to reach the login screen. And once I’ve submitted my user details it takes another 15 seconds for the desktop to be fully loaded (with all the taskbar icons in place and for the mouse cursor to be idle).

The MacBook has a large multi-touch track pad and Apple have allowed some of the multi-touch functionality to be used in Windows. 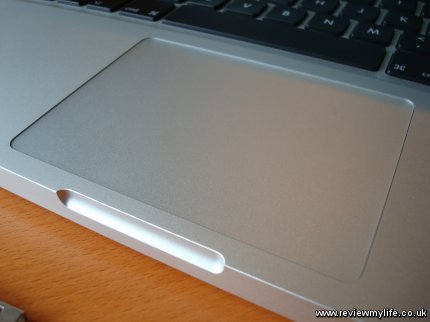 Moving across the trackpad with a single finger moves the mouse cursor as you’d expect.

Moving up and down with two fingers will scroll the current page up and down.

As there are no left/right buttons on the trackpad you have to click with a single finger for left-click, and click using two fingers for right-click. You can also configure the track pad to accept a single click in either the bottom left, or bottom right of the screen for the right click.

No three or four fingered gestures are supported yet.

The keyboard is large and feels good to type with, but it is with the keyboard that you may run into problems when you start using Windows 7. Many of the standard Windows keys that you are used to aren’t on the keyboard. For example there is no Home, End, Page Up, Page Down, Print Screen, Del, or Windows key.

Here are the keyboard shortcuts that allow you to get the functionality of these keys on your MacBook Pro.

USB, display port, and other hardware

Apple have been quite stingy with their USB ports. There are only two. If you want to attach more devices you’ll need to plug in a hub. Also both ports are very close together, so if you plug in a USB device with a larger than specification plug, you might not be able to plug in a second USB device. There is a FireWire 800 port as well if you have any FireWire 800 devices to plug in. 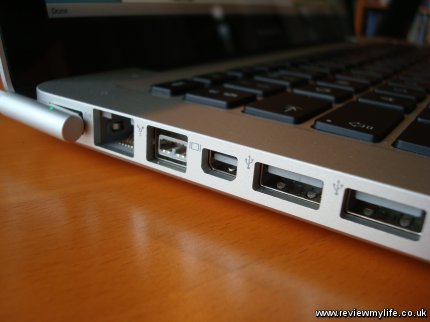 You won’t find any PC standard VGA monitor plug on the MacBook Pro. There is a Mini DisplayPort instead, so if you want to plug in a VGA monitor, or projector you’ll need to pay extra for an adaptor like this one.

The DVD drive, web cam, and SD drive all work as expected on the MacBook Pro.

Features such as hibernate and standby both work well. When hibernating you’ll have to make sure you select to boot from Windows on the boot partition selector if Mac OS X is your default OS.

In the Windows 7 taskbar (or from the Control Panel) you can access the Boot Camp control panel. 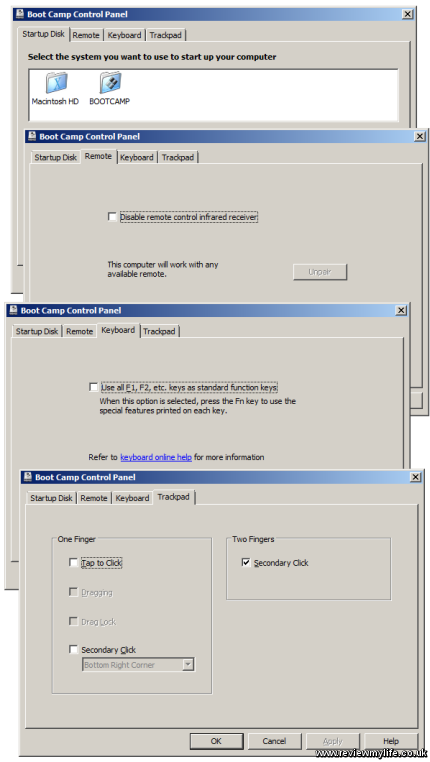 It will let you change settings relating to the keyboard mappings, and how the trackpad works. You can set how you activate the right-click for example. Right clicking on the taskbar icon gives you a ‘Restart in Mac OS X’ option.

After installing Windows 7 via Boot Camp the default boot partition will probably be OS X. If you want to change it to be Windows 7, boot into OS X, go to the System Preferences, then Startup Disk, and choose the Boot Camp partition

If I find useful utility programs for Windows 7 on a MacBook Pro I’ll list them here.

When I got the MacBook Pro a few weeks after it was released there was a problem where no sound came out of the headphone jack in Windows 7 (the headphone socket worked fine on Mac OS X. Apple have now released a patch for this problem – here is the 32 bit version, and the 64 bit version.

The most serious problems that I have encountered are complete freezes of the Windows 7 OS. I know I’m not the only person having this problem with running on Windows 7 on Mac OS as a simple Google search will show.

In my case I can be using Windows 7 for many hours, and then without warning it will completely freeze. The mouse and keyboard will both stop responding. Sometimes the system will wake up briefly after a few minutes, only to freeze again seconds later. Once it has got into this frozen state I find I need a reboot to fix it.

I’ve looked into some of the proposed solutions, but many of them aren’t applicable to the 2010 MacBook Pro 13 inch. What I’m trying at the moment is running Windows 7 with Aero turned off (using the Windows Classic interface).

Update 7th July 2010: I’ve now been running Windows 7 with the Classic UI instead of Aero for a month. Since switching to the Classic UI I have had none of the regular freezes that I’d been getting before. It looks like the freeze problems are therefore due to Aero / graphics chip related issues. Fingers crossed that either Apple or Microsoft release an update soon that allows Aero to be used without problems on the MacBook Pro. In the mean time I’m sticking with the Classic UI.

Update 30th November 2010: I switched back to Aero 4 days ago and so far no freezes. Looks like the problem is fixed, but I’ll update this post if any more freezes occur.

The good and bad

Here is a final photo. This is how I use my MacBook Pro at home. I have an external keyboard, USB hub and wireless mouse. With these extras it doesn’t look as neat, but it is much easier to use. 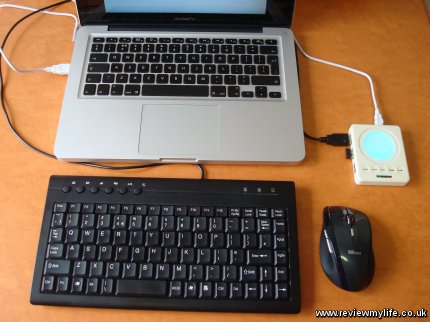 If you want to know how it is packaged look at my MacBook Pro – What’s in the box? post.