Ad Injection (the plugin for injecting adverts into your WordPress blog) version 1.2.0.0 should be out in a week or two (mid-September 2011). Here is a preview of some of the new features – the screen shots are from the unreleased version so the UI may change slightly before release.

Ad Injection already has many options for selecting exactly how the top, random and bottom ads are positioned. But some people need more control, so 1.2.0.0 will have a load of new features. 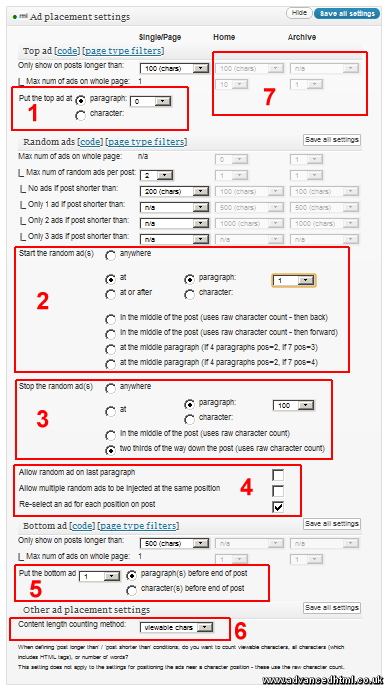 Blogs with thousands of tags

I had been having intermittent reports that parts of the UI were not drawing on some blogs. I found out that this was caused on blogs that had large numbers of tags, but very little memory. The old Ad Injection would load all the tags at once (which on some blogs could be thousands).

A recent update to Ad Injection includes an update to load the tags in batches of 100, and the new 1.2.0.0 version will move the filters section futher down the screen, so if you do run out of memory you will (hopefully) still be able to use the most useful parts of the UI. 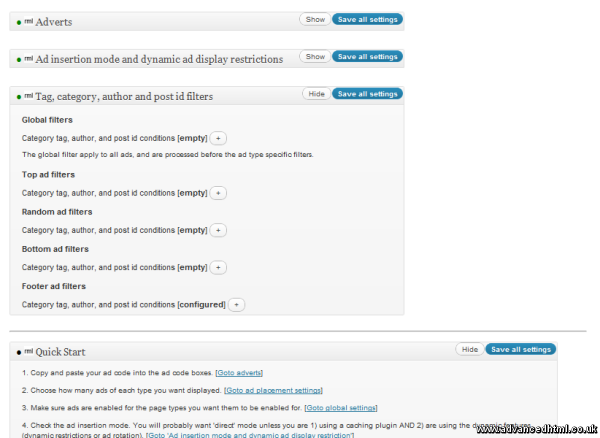 You can see in this screenshot the tick boxes which will become transparent instead of invisible in Ad Injection 1.2.0.0. And on the right I’ve added the ‘days older than’ settings information to the summary. These are important settings so I think it makes sense to have the information easily visible.

This update will include major changes to the part of the code that does the insertion of advert into your post content. As such it may contain new bugs – but don’t worry I usually get bugs fixed pretty soon after they are reported. If you want to beta test the 1.2.0.0 version contact me via the feedback form in Ad Injection, or via this website.

If you have any comments on the soon to be released Ad Injection 1.2.0.0 please do get in touch.

You can download Ad Injection from the WordPress site, or from your blog by searching for ‘Ad Injection’.

Include a different advert in each WordPress post depending on category

Notes on upgrading to WordPress 3.0 on 1and1