This page is about Japan re-entry permits and the embarkation / disembarkation cards that you have to fill in when you enter and leave the country. Both are closely linked together so I’ve put this information in one larger post, rather than two smaller ones.

If you have a visa (residence status) to be in Japan and wish to make a temporary trip out of Japan you will need to get a re-entry permit in order to re-enter the country without losing your residence status. 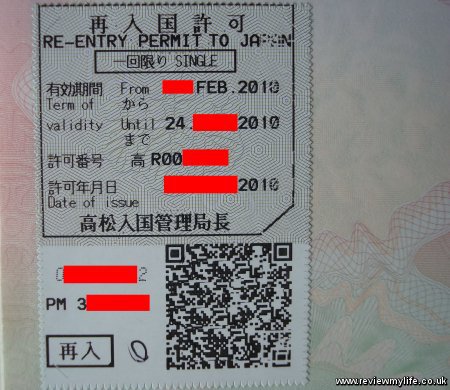 If you leave Japan without a re-entry permit then your residence status/period of stay gets automatically cancelled so it is very important to make sure you remember to get your permit.

How to get a re-entry permit for Japan

To get a re-entry permit requires a simple visit to your local immigration office. You can find the official application details and a copy of the application form on the immigration website.

I went to the Takamatsu immigration office where I first had to sign in at the door. Then I went to the 2nd floor to buy a revenue stamp. If you want a single re-entry permit it will cost you ¥3000, or if you want a multiple re-entry permit it will cost ¥6000. I bought a stamp for a single re-entry permit. In Japan they have this system of paying for revenue stamps in a different location to making the application so that no money changes hands when the application is made – this is to stop bribery attempts. The same revenue stamp system applies if you get a Japanese driving licence. 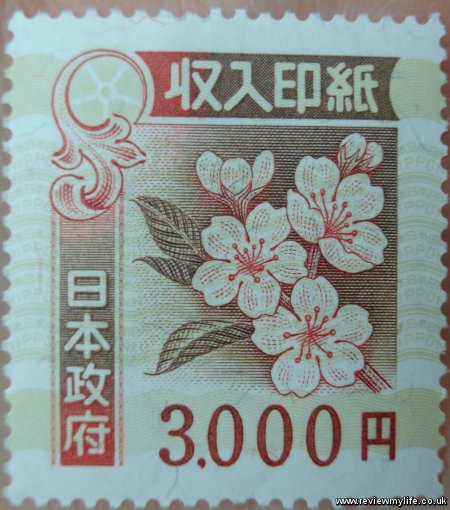 I then went to the 8th floor where the immigration application office is. In there I collected the application form and started filling it in. A man who spoke very limited English gave me a bit of help. I then handed it in along with my alien registration card and passport.

The questions on this form are asked from the point of view of your stay in Japan, which may not be clear from the English translation.

I had to sign this application form, and also the form onto which the revenue stamp was stuck.

I then had a five minute wait while they processed the application, they then gave me my passport and foreigner card back. My passport now had a re-entry permit stuck in it. The expiration date of the re-entry permit is the expiry date of your current period of stay, or a maximum of three years from today (whichever is earliest).

If you change/extend your residence status then any re-entry permit that you already have will be invalidated. Therefore you will need a new one if you want to make a trip out of Japan.

Most of you probably won’t be going to the Takamatsu immigration office, more likely you’ll go to the Tokyo one. Here are a few differences.

At the Tokyo office (the one near Shinagawa on the port island) you don’t have to sign in. You buy the revenue stamps from the Family Mart on the 1st floor (or ground floor – if you aren’t used to the Japanese floor numbering system). The re-entry stamp counter is on the 2nd floor, and after handing in the application you’ll be given a numbered ticket so you know when to come up and collect your passport.

When you first arrive in Japan you will have to fill in an embarkation / disembarkation card for foreigners. It looks like this and will probably be given to you on the plane.

If you don’t get given it on the plane you can pick it up before going through the immigration counter in Japan.

If you are a tourist you will only ever deal with this type of embarkation / disembarkation card.

Before going through immigration on arrival in Japan you must fully fill in the right side of the card. You can also fill in most of the details on the left side (but leave the flight number blank until you know for sure which flight you are leaving Japan on).

The immigration inspector will detach the right side of the card (the disembarkation part) and will staple the left side into your passport – probably on the same page as your landing permit that states how long you may remain in Japan.

Then when you come to leave Japan the immigration inspector will remove the embarkation part of the card from your passport – which must at that point be fully filled in with your departure flight number.

If you leave Japan with a re-entry permit then you will also be filling in this card.

When you leave and re-enter Japan on a re-entry permit the embarkation part of your original embarkation / disembarkation card for foreigners is not touched. It remains stapled into your passport.

Entering Japan with a visa and leaving once

Entering Japan with a visa and leave multiple times